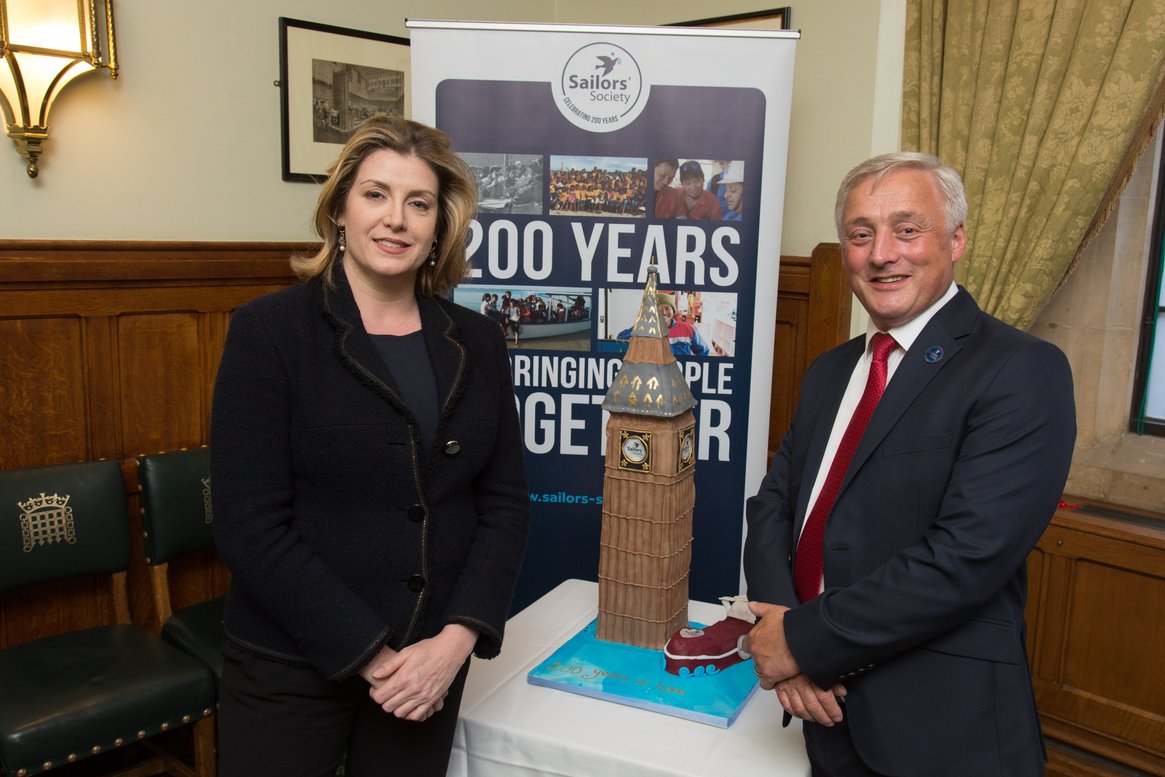 A host of industry representatives, MPs and members of the House of Lords joined international maritime charity Sailors’ Society to mark its 200 years of supporting seafarers and their families around the world, at a reception held in Parliament last week (6 June).

Penny Mordaunt MP said, “It was great to hear about the care and support Sailors’ Society has provided to seafarers in need over the past 200 years, such as working to help seafarers look after their mental health during the long contracts at sea and supporting their families back at home in times of crisis.”

Representatives from many of the charity’s partners joined the event, including from Britannia P&I, Coltraco Ultrasonics Ltd, Inmarsat, UK P&I, Waves Group, Queen Victoria Seamen’s Rest and Seafarers’ International Research Centre. The event was also attended by Jackie Doyle-Price, Minister for Mental Health, who recently went ship visiting with the charity to hear about its Wellness at Sea programme and talk first hand with seafarers about conditions on board.

Kim Spooner, whose aunt and uncle lost their lives in the Herald of Free Enterprise disaster, spoke movingly about her family’s experience and the support they have received from Sailors’ Society over the years. A video case study from Sailors’ Society’s Albanian port chaplain, Ilir Cami, highlighted why seafarers are often reluctant to be open about health problems for fear of losing their job, and the sometimes tragic consequences of this.

Sailors’ Society’s CEO Stuart Rivers said, “We’re so grateful for the support we receive from our corporate partners, which makes so much of what we do possible. MPs also have a long history of supporting the charity’s work – very appropriately, our first Chairman was Bernard Shaw MP.

“However, being 200 years old doesn’t mean we can sit back on our laurels, and we continue to change and adapt in order to better support the men and women who play such an important role in transporting our goods at sea.”

Sailors’ Society was founded on 18 March 1818 to minister to the needs of destitute seafarers returning home from the Napoleonic Wars.

The charity now works in 30 countries around the world, supporting seafarers and their families at home, in port and at sea, through the delivery of chaplaincy, education and the relief of poverty and distress.

Notes to Editors:
For more information, please contact James Leslie on 023 8051 5950 or via press@sailors-society.org.

About Sailors’ Society
Sailors’ Society has been bringing people together for 200 years, transforming the lives of seafarers and their families at home, in port and at sea through the delivery of chaplaincy, education and the relief of poverty and distress.

The charity works internationally to provide practical, emotional and spiritual welfare support to the world’s 1.6m seafarers, regardless of background or faith. Sailors’ Society chaplains and ship visitors have a presence in 91 global ports, with wider projects and services covering 30 countries.

You can explore the charity’s 200 year journey at https://www.sailors-society.org/200-years/